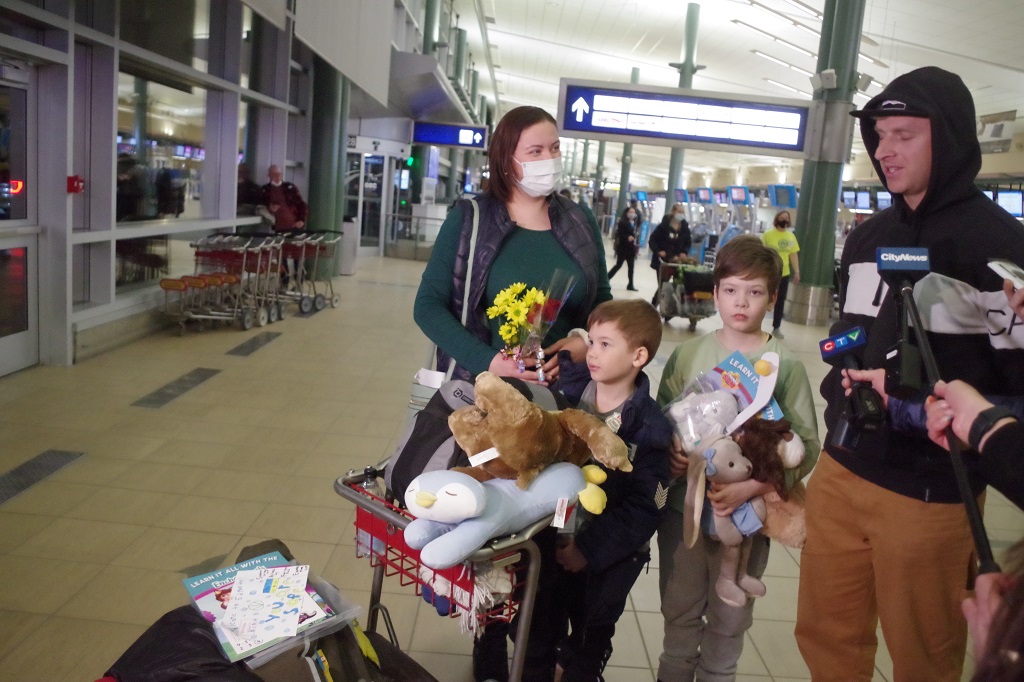 Sixty-two displaced Ukrainians arrived in Edmonton March 28 in the first major airlift of refugees from Poland to Canada.

They came on a privately sponsored airplane from Warsaw landing at 6:45 pm and, after approximately two hours of processing, were welcomed by volunteers from the Ukrainian community who led them from the international arrivals gate to a special reception where friends are relatives were waiting to take them to their homes. 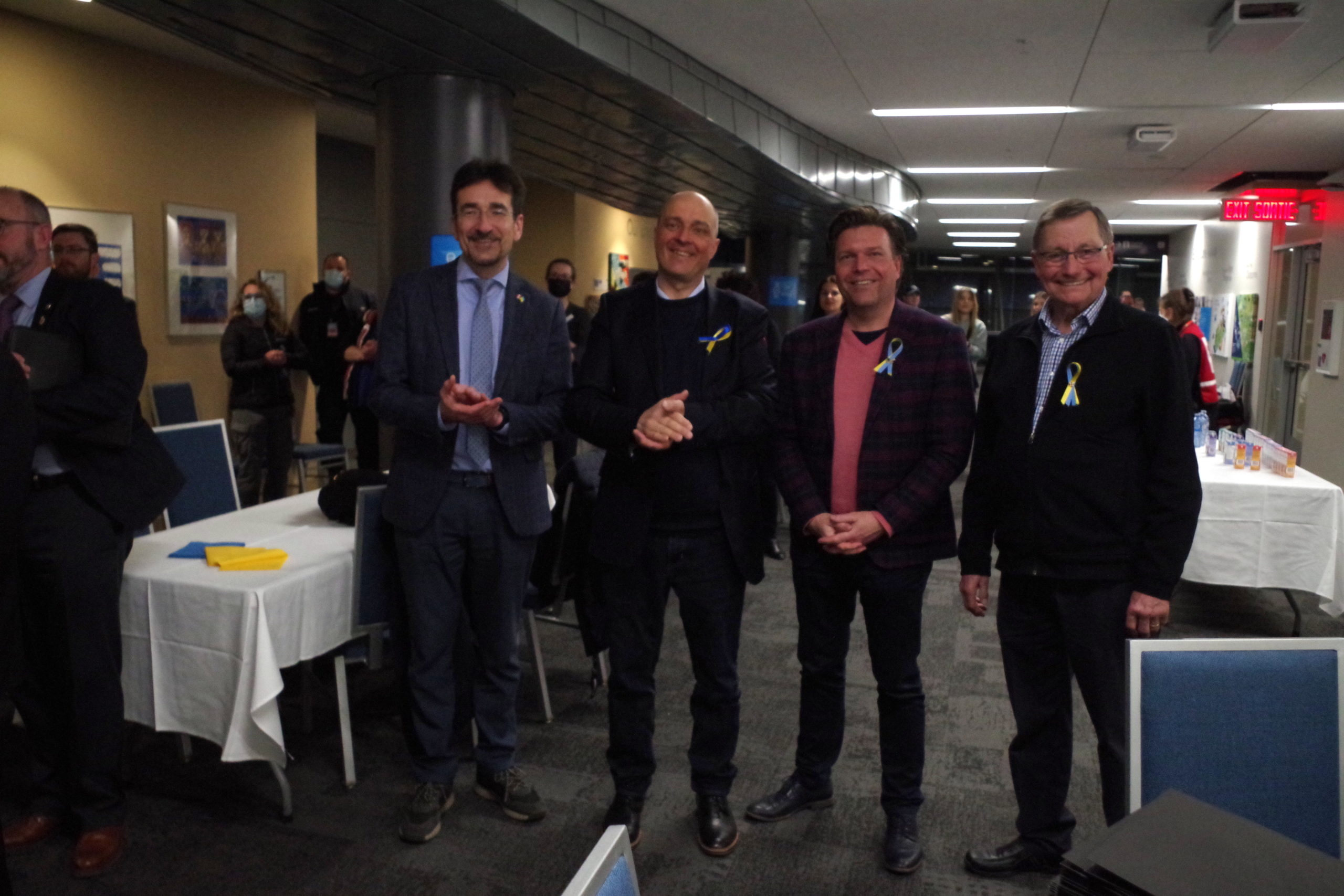 Also there to greet them were Ukrainian community leaders, Ukraine’s General Consul in Edmonton, Oleksandr Danyleiko, Poland’s General Consul for Vancouver, Andrzej Mankowski and Alberta Lieutenant Governor Salma Lakhani who told them she too arrived in Canada as a refugee. She was among the Asians expelled from Uganda 50 years ago.

The welcoming operation, which was organized by UCC Alberta President Orysia Boychuk and UCC Edmonton President Anastasia Khoma with help from community organizations, proceeded very smoothly. The community already has a team of 144 volunteers manning welcoming tables at Edmonton International from 8 am until 2 pm daily to greet any refugees arriving on their own.

Upon arriving they are handed information packages about Edmonton with critical information on adjusting to their new life. This campaign is being coordinated by the Edmonton Branch of the Ukrainian National Federation, headed by Ivan Lypovyk.

All of the 62 refugees who arrived on the 250-seat Boeing 787 Dreamliner donated by Polish Lot Airlines had their visas approved under rules that existed prior to the March 17 announcement of the Canada-Ukraine Authorization for Emergency Travel (CUAET) as those still have to be processed.

The Government of Canada has not announced any financial support for Ukrainian refugees at this point nor has it organized any flights to bring them here.

Lypovyk, who brought five refugees into Canada on this plane said that had it not been available, it would have cost anywhere from $4,000 to $6,000 to bring them over.

The plane arrived in Edmonton under a private initiative organized by former Alberta Premier Ed Stelmach, former Alberta Deputy Premier Thomas Lukaszuk and the Canadian Polish Historical Society, who arranged for the donation of the plane and 50 tonnes of jet fuel from Shell Canada to pick up humanitarian supplies in Edmonton. 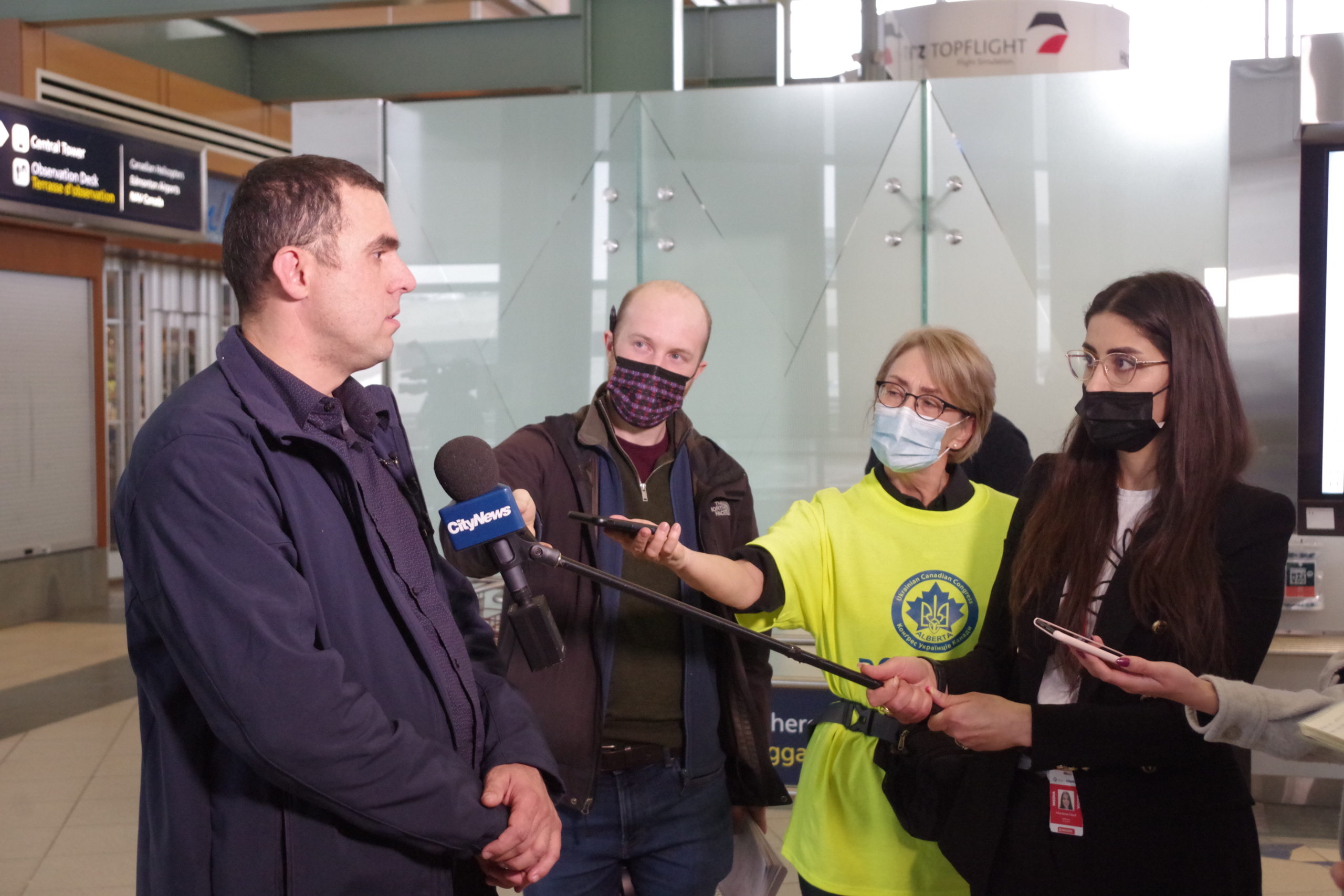 Lukaszuk, who left then-Communist Poland as a refugee in 1982 told New Pathway Ukrainian News, that after he witnessed the horror of Russia’s invasion on television he thought something must be done “so I called my good old colleague from cabinet Ed Stelmach and said let’s see what we can do.”

At first they thought they could get a few medical supplies and ship them by courier “but the moment we put the word out there was no stopping. It kept growing and growing and we ended up with two warehouses full of stuff.”

That’s when they decided to arrange for a plane. The most expensive and time sensitive equipment, like medical diagnostic equipment, surgical tools, tools for firefighters to extract people from falling building was sent on the plane, the rest by sea.

They contacted refugees through the Polish Ministry of the Interior which works with all the charities in the country and they put the word out to any refugees who were interested and who had a family in Canada. Only those who already have biometric passports were eligible and most Ukrainian refugees in Poland do not have them yet and must first apply.

Though scarred by wartime experiences and tired from their long journey the refugees appeared to be in a buoyant mood as they were greeted with hugs and applause by the welcoming group.

“The first thing they said was is this reality or are we just dreaming,” Andrii Novutskyi from Red Deer told reporters as he escorted his sister-in-law and nephews from Cherkasy to the parking lot.

Natalia Genyk from Ivano-Frankivsk was relating the horrors of being bombarded at night to NP-UN as her daughter piped in “we will win this war”.