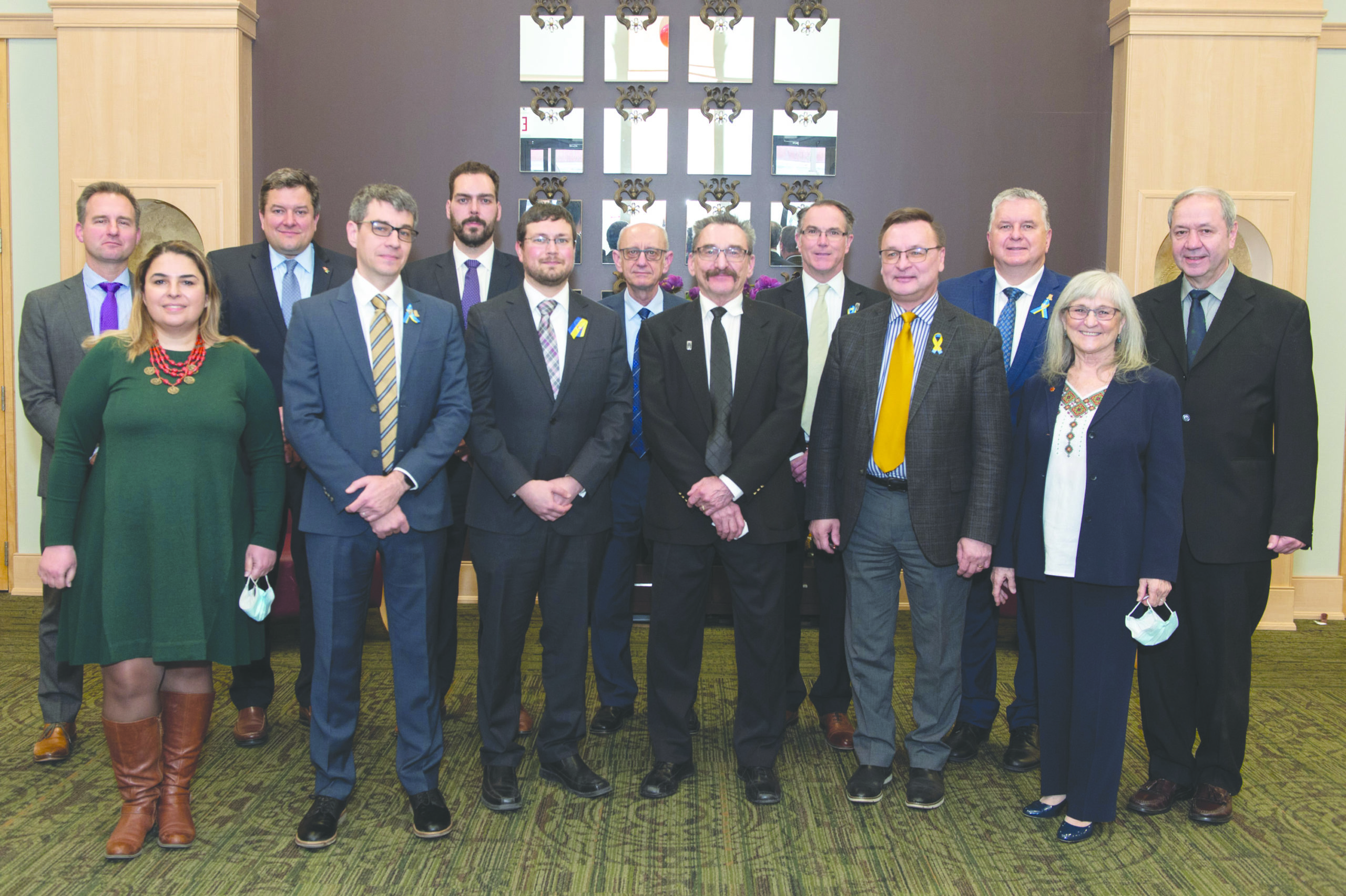 UCU board members and management at AGM on April 19. Photos: UCU

While presenting the 2021 Annual Report, UCU CEO Taras Pidzamecky announced another achievement: last year, UCU posted a record net income of $4.52 million. In 2021, UCU remained the largest Ukrainian Canadian credit union by number of members and branches. All of that happened despite the many continued COVID-related disruptions of last year.

UCU Board of Directors Chair, Yaroslaw Borys reflected upon UCU’s efforts to support the Ukrainian Canadian and wider community and help Ukraine. In 2021, the credit union donated over $500,000 back to the community. Yaroslaw Borys also recognized the UCU Helps Ukraine team who has been working tirelessly since 2014 to support Ukrainian veterans, their families and now the men and women who continue to defend Ukraine’s sovereignty today. This dedicated team of volunteers has raised over $600,000 since 2014, including over $300,000 since the expansion of russia’s war in February of this year (in the AGM’s resolution the terms ‘russia,’ ‘russian federation,’ ‘vladimir putin,’ and related terms were set out in lower case in solidarity with the official adoption of this orthography by Ukraine in Ukrainian as a result of russia’s war). 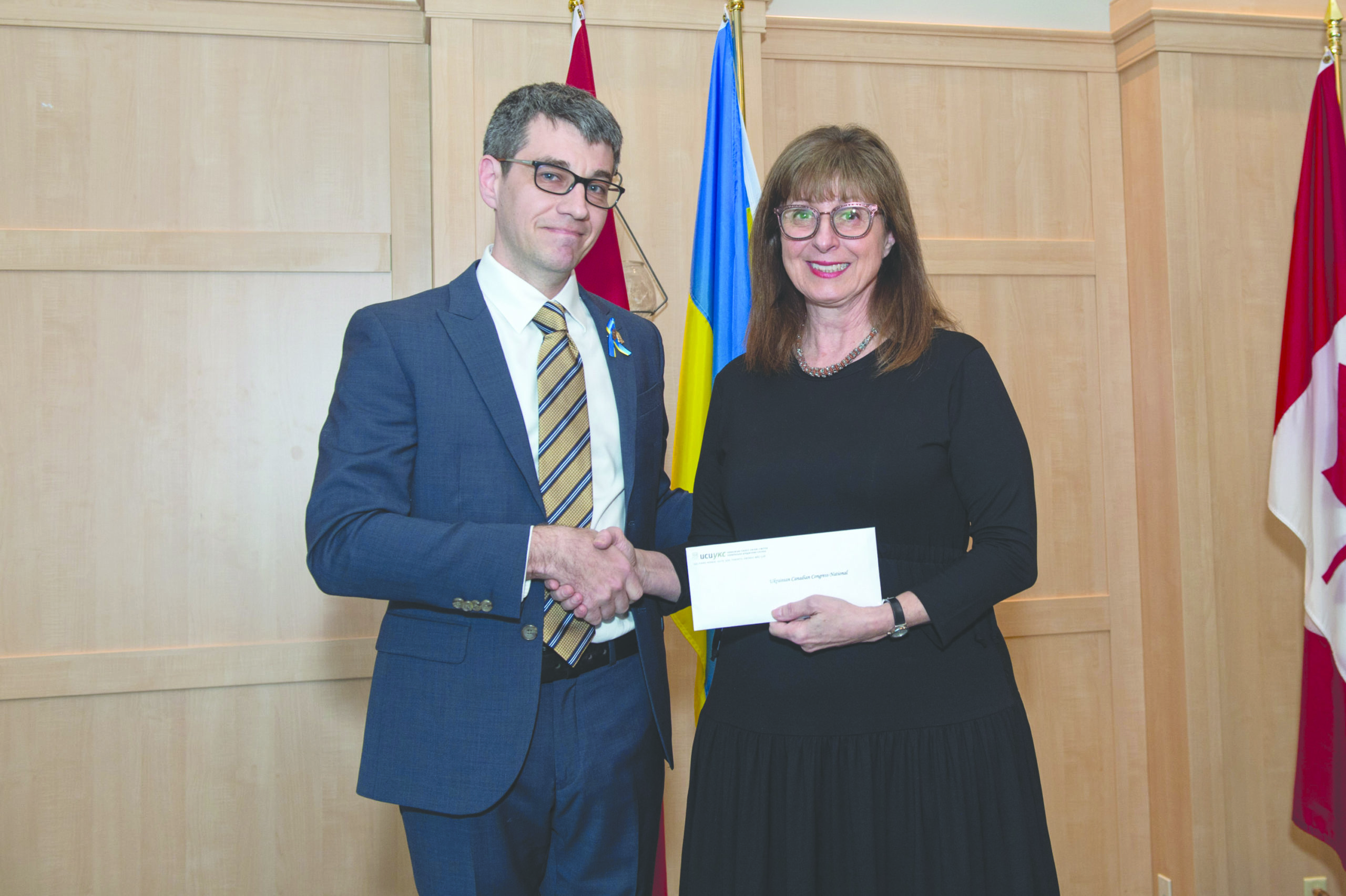 Yaroslaw Borys, UCU Chair of the Board presents a donation cheque to UCC National President Alexandra Chyczij during UCU's AGM on April 19

At the AGM, UCU’s directors and management pledged to continue to stand with Ukraine as well as Ukrainians who are taking temporary refuge in Canada.

During the escalation of the russian military presence at the Ukrainian border in late 2021, UCU stepped up its support for the organizations that provide humanitarian and military assistance for Ukraine.
Recently, the credit union has launched the “Welcome Ukraine” program which will be offering newly arrived families free banking services, access to credit and financial support services to help ease their acclimatization to life in Canada. Yaroslaw Borys urged all UCU members who are hosting friends and family to reach out to UCU Welcome Ukraine program so that the credit union can help the newly arrived Ukrainians with all their financial needs.

At the AGM, UCU’s members voted to:

1. Condemn the russian federation for its unprovoked war against Ukraine, and especially for the war crimes and crimes against humanity perpetrated by its leadership and military against Ukraine’s peaceful population, and calls for them to be brought to justice;

2. Appeal to the conscience of the leaders and citizens of the Western democracies, whose complacency over three decades of Ukraine’s independence and prioritization of affluence over human dignity and the cause of peace, have enabled vladimir putin’s regime to pursue with impunity a foreign policy of aggression, to take bolder action in providing military and humanitarian assistance to Ukraine;

3. Urge Ukrainian Credit Union Limited to assist Ukraine in any prudent way it can to permanently rid the country of its russian occupiers, to help refugees fleeing the war, and to achieve true security for Ukraine and globally by advocating that russia be held fully responsible for its aggression against Ukraine through its removal as a permanent member of the United Nations Security Council, payment of long-term reparations to Ukraine, and the thorough and permanent degradation of the russian federation’s ability to threaten any other country in the world ever again.