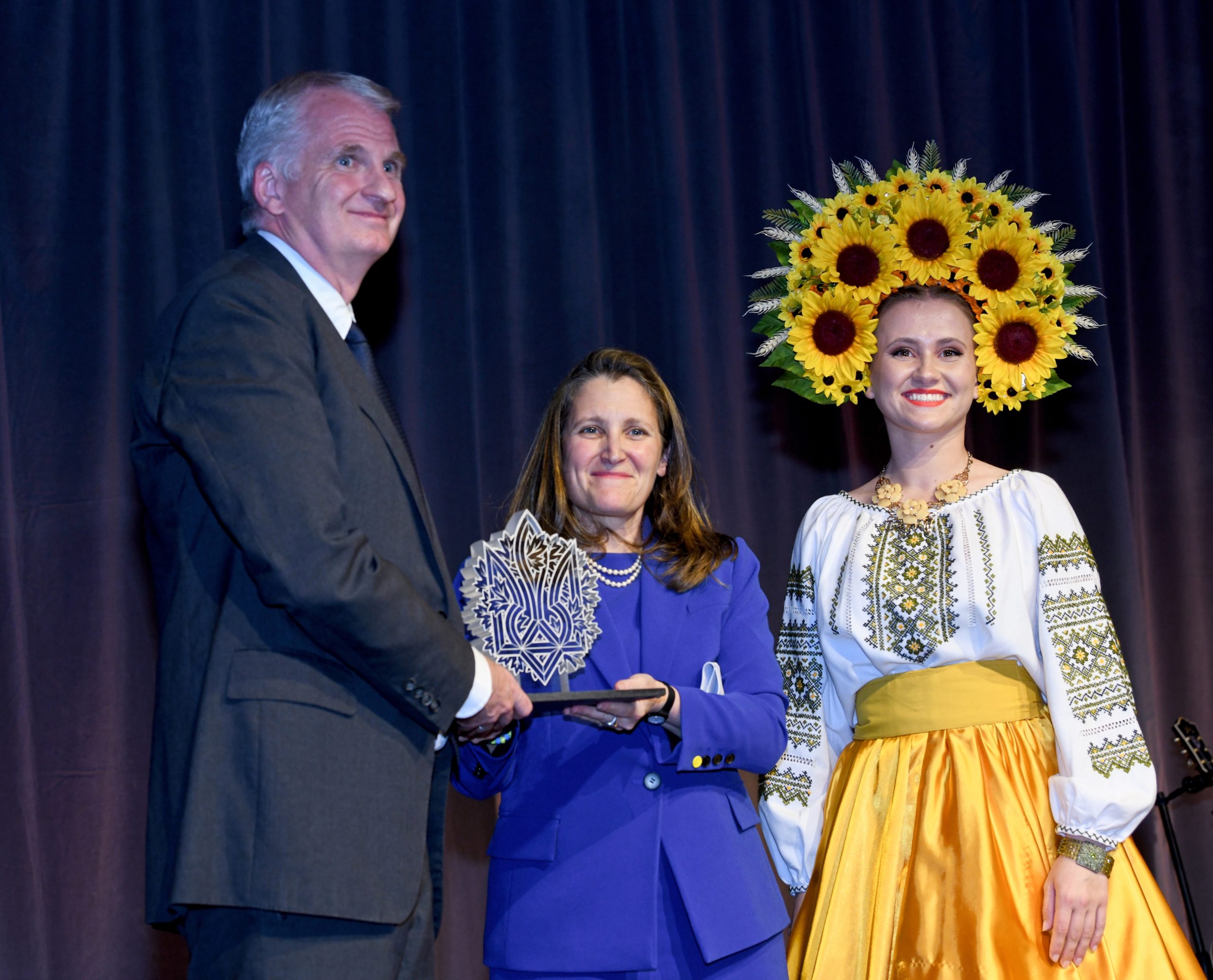 Over 200 guests gathered at the Art. Gallery of Ontario on May 12 for the 2022 Tryzub Awards Gala to honour (Ret.) Lt.-Gen. Paul Wynnyk and Dr. Timothy Snyder for their contribution to strengthening the Ukrainian brand.

This year’s recipients of the Tryzub Award are two stellar representatives of the immeasurable support being afforded the Ukrainian nation at all levels of society, across different fields and professions.

Retired Lieutenant-General Paul Wynnyk’s life’s work is rooted in the military, having held many leadership roles during his distinguished career. The significance of his contribution as Commander of the Canadian Army to developing Canada’s mission in Ukraine known as Operation Unifier is now fully understood in the framework of today’s global fight for democratic principles and values. 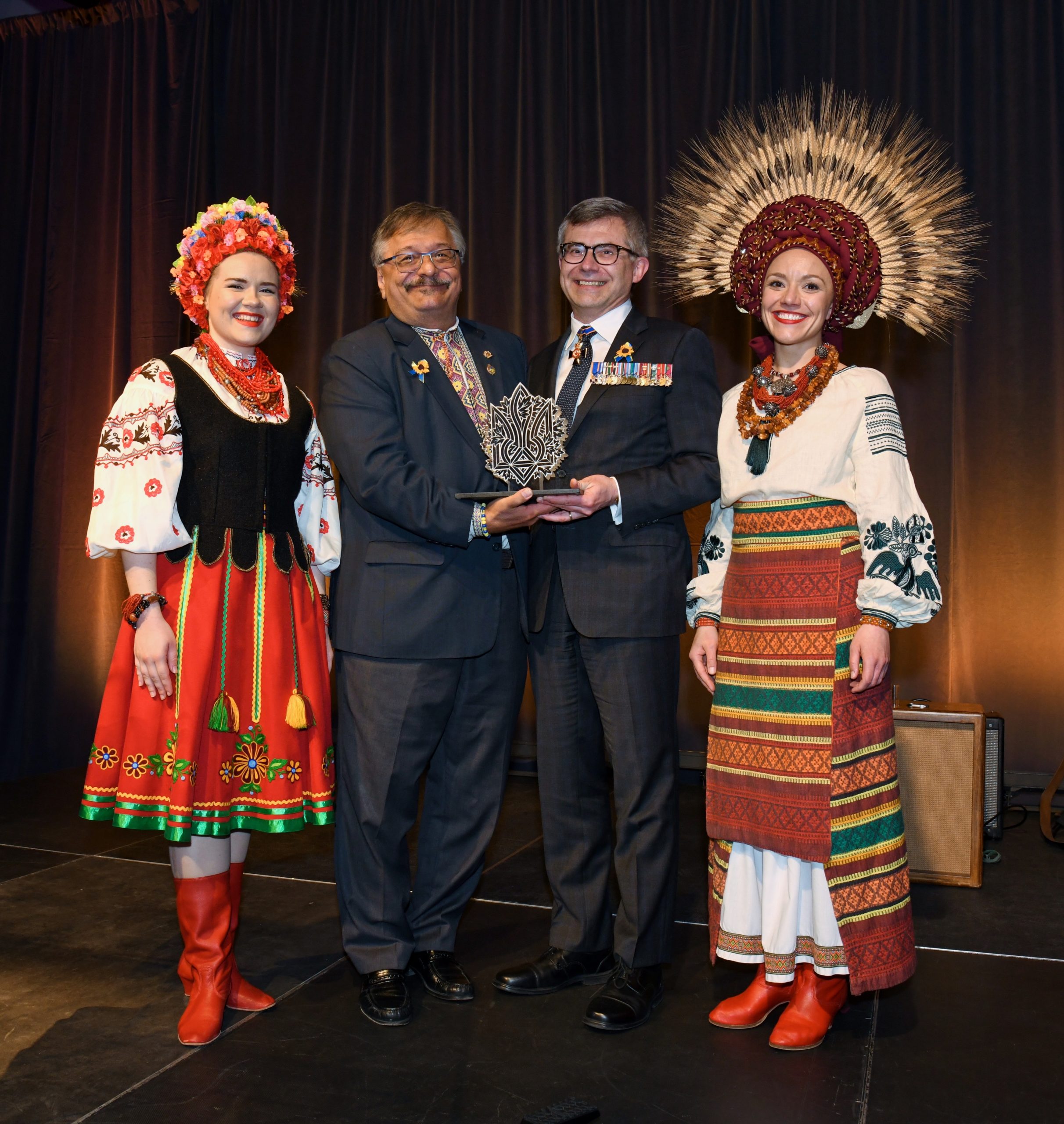 In his remarks Lt.-Gen. Wynnyk highlighted the contributions of Ukrainians throughout history to the Canadian Armed Forces as they stood on the front lines in defense of freedom and democracy. Later the Canadian military was proud to contribute to the development of Ukraine’s armed forces with Operation Unifier – a project launched during Lt.-Gen. Wynnyk’s tenure as Commander of the Canadian Army. The two countries have always enjoyed close relations which have only been further strengthened since the war began.

Dr. Timothy Snyder, prominent historian, is the Richard C. Levin Professor of History at Yale University and a permanent fellow at the Institute for Human Sciences in Vienna. With his work having been translated into 40 languages, his insights on historical truths have impacted what is directly in front of the newscaster in the hour’s news cycle and contributed to a better-informed public.

Snyder presented another perspective in his remarks focusing on the role of the Ukrainian story in world history. Noting how the major events of the 20th century make more sense with Ukraine at the center, Snyder paid tribute to the Ukrainian people for reminding us that democracy is about more than freedom and dignity. Democracy is also about communication and relationships – two factors that have helped to bring the world to Ukraine’s side, and about taking action at “that moment when something has to be defended.”

The Foundation is one of the beneficiaries of the proceeds from the Tryzub Awards Gala which are being evenly split with the Canada Ukraine Foundation.  Gordon Gordey announced three new programs the Foundation will be launching to help the Ukrainian community welcome newcomers, particularly displaced Ukrainian youth. Two programs will focus on the inclusion of displaced children and youth in recreational, arts and cultural programs, while the third will provide youth with professional arts scholarships and mentorships.

The Shevchenko Foundation expresses gratitude to Rayla and George Myhal of the Myhal Family Foundation for their vision and partnership in organizing this gala evening in recognition of community leaders and friends of Ukraine. A special thank you to Event Chair Rayla Myhal for her leadership and commitment to its tremendous success.

Thank you to Master of Ceremonies Marta Czurylowicz, the students of St. Demetrius Ukrainian Catholic School and the Yavir dancers for enhancing the tribute.

An event that was first sidelined by the pandemic, and then almost derailed by the war, organically transformed into a tribute to the Ukrainian people, a nation that has grown immeasurably in size.  Both honorees complemented each other in delivering a single message of praise, support, and conviction in Ukraine’s final victory. Ukraine’s European future is within its grasp and most importantly, the Ukrainian people are not fighting alone. Today – we are all Ukrainian!